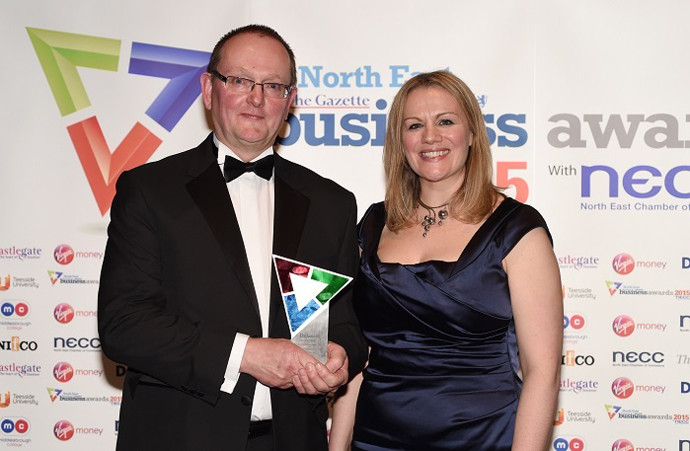 The award was presented to Tomlinson Hall by Small Business category sponsors FW Capital at a glittering ceremony on March 26 at Teesside University.

Tomlinson Hall will now battle it out against firms from the wider North East region for the overall Small Business trophy in the North East Business Awards final, which takes place on April 23 at Hardwick Hall Hotel, Sedgefield.

Now in their fourth decade, the North East Business Awards are organised by the Middlesbrough Gazette and its sister paper on Tyneside, the Journal, in association with the North East Chamber of Commerce. Companies from Tyneside and Northumberland and Wearside and County Durham - as well as Teesside - take part in the competition.

This awards success follows the company’s January triumph in the North East Process Industry Cluster (NEPIC) Annual Awards, where it was named SME of the Year. The NEPIC awards recognise outstanding achievement in the process sector, with NEPIC – the first cluster in the UK to receive the Gold Label for Cluster Management Excellence – boasting hundreds of member companies from across a wide range of industries.

Tomlinson Hall is an approved global distributor for major industrial pump brands, including DEPA and ELRO. The firm, which has operated since 1919 and is a co-founder of the Pump Distributors Association, has seen highly impressive sales growth in the last three years.

It has grown sales for global pump manufacturer CRANE ChemPharma Flow Solutions – manufacturers of DEPA and ELRO pumps – year and year and last year recorded its best annual sales results for Crane since its appointment by the company in 2006.

Colin Simpson, business development director of Tomlinson Hall & Co Ltd, said: “The competition for the Small Business Award was fierce and we were up against some truly innovative companies, so to come out as winners is testimony to the ingenuity, dedication and commitment shown by our staff.

“It’s an honour to receive this recognition from the Teesside business community and the award means a great deal to our team.

“Combined with our recent triumph in the NEPIC Awards and the relaunch of Liquivac, this marks a fantastic start to 2015 and a highly exciting time for Tomlinson Hall.”

Tomlinson Hall has won the UK Pump Distributor of the Year Award four times at British Pump Industry Awards, most recently in April 2014.